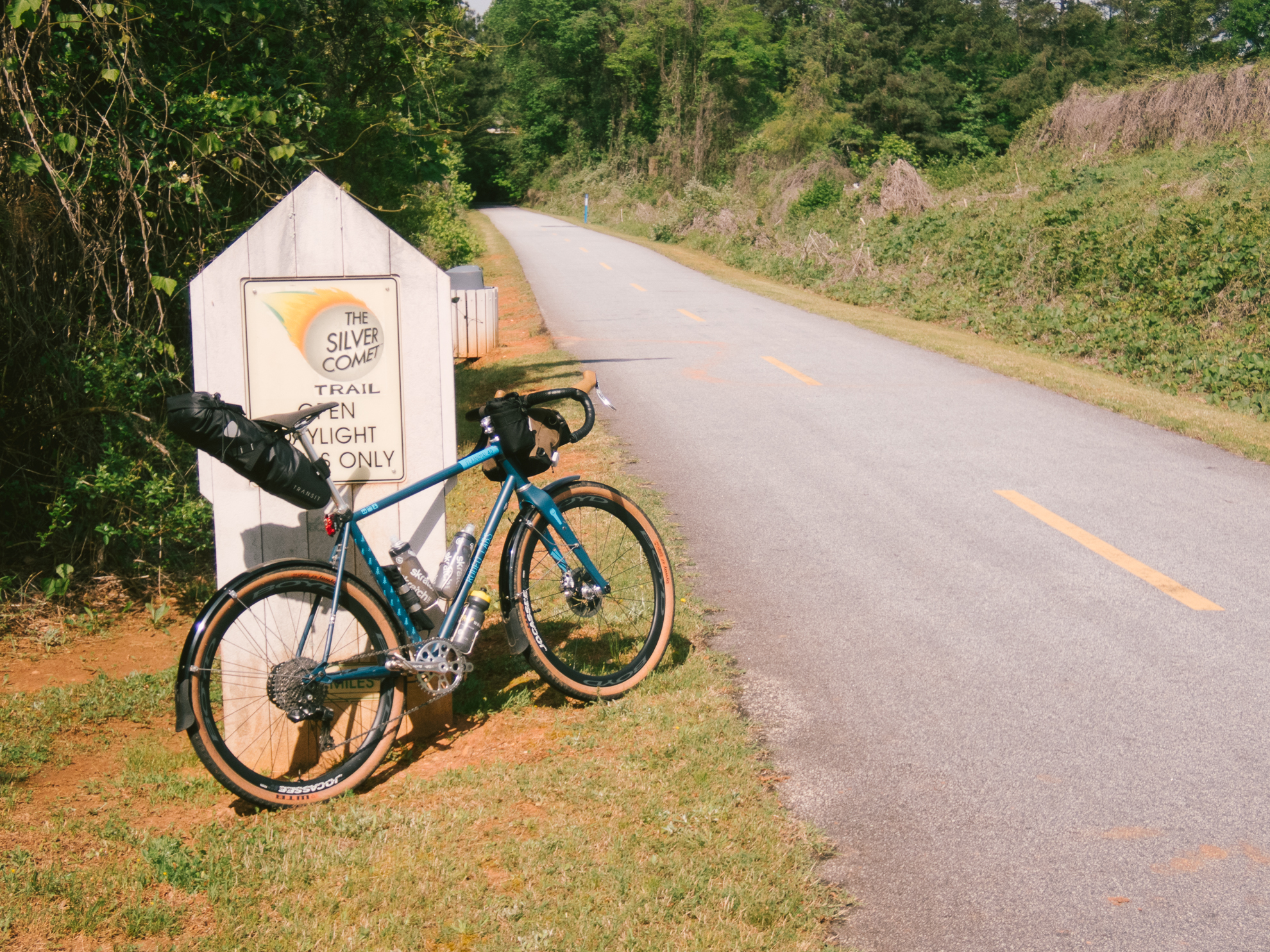 I rode 101 miles this past Friday with headwinds the entire way from Smyrna, GA to Anniston, AL – and then back to Jacksonville, AL to spend the night. Got back up and rode all the way to the new Braves stadium in Marietta, GA (95 ish miles). Total trip was roughly 16 hours on the bike and 195 miles of pedaling. Solo.

I made multiple stops along the way to get relief from the 15-35 mph headwinds. Ate a sandwich at Soli’s Soup, Salads & Sandwiches in Rockmart, GA – which is right by the trail.

I then grabbed a double-shot espresso in Cedartown and a peanut butter cookie at the Ideal Bakery. That hit the spot. These two towns are great stops right along the trail.

After the the ‘big hill’ and eventually the GA/AL state line, the ride is pretty dang remote. I barely saw anyone Cedartown, GA all the way to Jacksonville, AL. This was a test of the mind and body. A forest service truck was parked on the trail… I guess tending to wild game. I saw a turkey that would probably come up to my waist in height.

Sorry to say it folks, but the end of the Chief Ladiga trail in Anniston is kinda boring. You can camp out at a really nice campground, or have someone pick you up, or turn around and head back to Jacksonville. The tailwind put me in a good mood so I even found a halfpipe drain to ride in before making my final push up the hill to the B&B.

Once I got to the B&B, I got situated, out of the silly lycra and into the shower. After that my host graciously lent me a car to grab some dinner. It was a pretty special ride considering it was a BMW Z3 convertible that she’s owned for ten years (I’ve owned a z3m coupe for roughly the same amount of time). Once I filled my belly to the brim with Loco Mex – I tried to pass out, but my body was too wired from the day to really sleep.

I looked up just about every possibility to avoid riding a bicycle again back to Atlanta. Uber doesn’t exist in Jacksonville, AL – and a cheap pickup truck on Craigslist tempted me to cheat my way home. A few hours of sleep, clean clothes (B&B washed my cycling kit – how nice!), a great breakfast and cooler temperatures in the morning was enough motivation to get back on the bike and ride back to Atlanta.

I set my finish line for Antico Pizza in Battery Park (aka new Braves stadium). There were a lot more cyclists on the trails on Saturday, but I only saw two or four riders that were bikepacking. A gal on an aero tri-bike came alongside me at about mile 60, so I hopped on her wheel to pick up the pace for a while.

This lifted my spirits a good bit and hopefully didn’t freak her out too much. We rode along for a good 10-15 miles until she dropped a bottle – and I kept going. Of course she passed me again, but it’s kinda hard to do 24 mph on a 1×11 gravel bike without someone breaking the wind.

Once the Silver Comet trail ends – you’re on a trail extension pretty much the entire way to the park. It was on a game day so the roads were a little crazy and the crowds were probably giving me funny looks, but I didn’t care because my wife was there to greet me with a big smile.

We took a few pictures, got out of the silly lycra, ate some pizza and drove back to the burbs of ATL. This was a great trip. Sure, it would’ve been more fun with a buddy riding with me, but I also was content to spend some time pedaling solo for the two days.


In conclusion, this ride was awesome. Sure, there aren’t many scenic overlooks like you get on the Blue Ridge Parkway, but you also don’t have to deal with climbing mountains – or worrying about cars for the most part. GA/AL is fortunate to have such a long continuous trail system. I’m glad to mark this one off the bucket list.

This site uses Akismet to reduce spam. Learn how your comment data is processed.